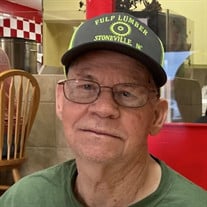 Cecil Bullins, 86, of Mayodan passed away on Wednesday, November 17, 2021 at his home. A 3:00 p.m. funeral service will be held on Sunday, November 21, 2021 at Ray Funeral Home with Dr. Jim Crews officiating. Burial will follow at Knollhurst Cemetery. The family will receive friends for one hour prior to the service beginning at 2:00 p.m. and all other times at the home of his daughter, Sandy (170 Fulp Sawmill Road, Stoneville, NC 27048). Cecil was born in Stokes County, to the late Pete and Rosie Mabe Bullins. He was a good, faithful Christian man and attended Community Worship Group in Madison. He was a loving husband, father, and grandfather. Cecil enjoyed gardening, going to the beach, and watching NASCAR. In addition to his parents, he is preceded in death by his brothers, Owen, Olyian, Leonard, Bobby, Bill, and Kenneth Bullins; and his grandson, Coleman Haley. Those left to cherish his memory are his loving wife of 65 years, Barbara Hatcher Bullins of the home; his children, Ricky Bullins of Madison, Kathy Haley and husband Mark of Stoneville, Randy Bullins and wife Lisa of Eden, and Sandy Martin and husband Jerry of Stoneville; his brothers, P.C, Bullins and wife Jeanette of Madison and Avery Bullins and wife Doris of Madison; his sister, Jane Hicks of Pine Hall; eight grandchildren, Rich Bullins, Aderon Haley, Matt Bullins, Elizabeth Smith, Daniel Bullins, Dylan Martin, Austin Bullins, and Lucas Bullins; and five great-grandchildren. In lieu of flowers, memorials may be made to American Diabetes Association, PO Box 7023, Merrifield, VA 22116 or to Hospice of Rockingham County, PO Box 281, Wentworth, NC 27375. Ray Funeral Home is honored to serve the family of Cecil Bullins and all are invited to share memories or offer condolences at www.rayfuneralhome.com.

Cecil Bullins, 86, of Mayodan passed away on Wednesday, November 17, 2021 at his home. A 3:00 p.m. funeral service will be held on Sunday, November 21, 2021 at Ray Funeral Home with Dr. Jim Crews officiating. Burial will follow at Knollhurst... View Obituary & Service Information

The family of Cecil Bullins created this Life Tributes page to make it easy to share your memories.

Cecil Bullins, 86, of Mayodan passed away on Wednesday, November...