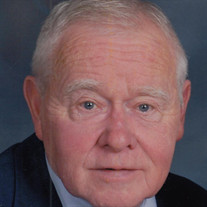 Charles “Wayne” Stevens, 79, passed away on Wednesday, November 20, 2019, at his home. A 2:00 p.m. funeral service will be held on Saturday, November 23, 2019, at Old Country Church with Rev. Donnie Chandler officiating. Burial will follow in the church cemetery. The family will receive friends for one hour prior to the service at the church. A Rockingham County native, Wayne was born on December 12, 1939, to the late Will and Pearlie Manuel Stevens. Wayne strongly believed in helping people and was of the Baptist faith. He spent 40 years with the Madison Rescue Squad where he served as Chief for 20 years. He also spent 20 years with the Madison Fire Department. He later retired from both. In addition to his parents, Will and Pearlie Stevens, he was preceded in death by three brothers Stafford “Holly”, Ray and Jackie Stevens and one sister, Lola Pyrtle. Wayne is survived by his loving wife of 59 years, Rena Stevens of the home; his sons, Dwayne Stevens (Stephanie) of Burlington, Tim Stevens (Jodi) of Stoneville, and Jeff Stevens (Tara) of Madison; his sister, Betty Harter (Joe) of Mayodan; and eight grandchildren, Brock Ayers (Jenny), Magen Stevens, Neil Ayers (Hailey), Lacey, Dylan, Kyle, Ethan and Amber Stevens. In lieu of flowers, memorials may be made to Hospice of Rockingham County, PO Box 281, Wentworth, NC 27375 or Old Country Church Building Fund, 241 Sisk Mill Road, Madison, NC 27025. Ray Funeral Home is honored to serve the family of Wayne Stevens and all are invited to share memories or offer condolences at www.rayfuneralhome.com

The family of Charles "Wayne" Stevens created this Life Tributes page to make it easy to share your memories.

Send flowers to the Stevens family.