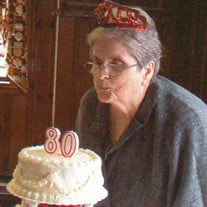 “There is no such thing as an ordinary life.” Garnette Mae Boles Holt passed peacefully to her Heavenly home on Monday, October 12, 2020, with family by her side at the Hospice Home of Rockingham County. A 2:00 funeral service will be held at Ray Funeral Home Chapel, in Madison on Thursday, October 15th with Pastor John Atkins officiating. Burial will follow at Mayodan Municipal Cemetery. (COVID restrictions will apply). Garnette was born on New Year’s Day, January 1, 1929 to the late Claude and Leona Atwood Boles and had lived all her 91 years in Mayodan. She was a member of The Refuge Church in Mayodan and loved listening to gospel music. One of her favorite childhood memories is a story about how she and her sisters would sit on the front porch of their parents’ home during the summer, and sing old gospel songs as people strolled down the streets, after a softball game at Mayodan ballpark. In true sisterly fashion, though, as they would sing, one of the sisters would complain that another sister was out of tune and they'd all agree to start the song over until another sister was out of tune. It was a treat to hear them as you walked by. Garnette married James "Dick" Lewis Holt. In her journal, she wrote about meeting Dick when he was home from the Army and for their first date, he took her to the big city of Greensboro. She even got to pick whether they went to a drive-in movie or a "walk-in" movie. That night, he told her she was beautiful and that she had skin like porcelain, and she liked that. Dick proposed to Garnette on her front porch after two dates. Her greatest joy throughout her life was spending time with her family and this included going on many trips with her children and grandchildren. Garnette never had a driver’s license, so she saw every trip as a great adventure into the world. In addition to her parents, Garnette was preceded in death by her husband, Dick Holt, a beloved daughter, Lisa Holt Watkins, a special grandson, Brad Watkins, her two brothers, Cecil Boles and JT Boles, four sisters, Wilma Dean Boles, Jacqueline Belton, Shelby Adkins and Barbara Ann Smith. She is survived by her brothers, Winford "Wimpy" Boles (Shirley), and Wayne Boles (Lib), her children, Gail Bledsoe (John), Kenny Holt, Larry Holt (Ruthie), Tammy Amos (Mike), her six grandchildren, and five great grandchildren. In lieu of flowers, memorial contributions may be made to the Hospice Home of Rockingham County and The Refuge Church in Mayodan. Ray Funeral Home is honored to serve the family of Garnette Holt and all are invited to share memories or offer condolences at www.rayfuneralhome.com.

&#8220;There is no such thing as an ordinary life.&#8221; Garnette Mae Boles Holt passed peacefully to her Heavenly home on Monday, October 12, 2020, with family by her side at the Hospice Home of Rockingham County. A 2:00 funeral service will... View Obituary & Service Information

The family of Garnette Boles Holt created this Life Tributes page to make it easy to share your memories.

“There is no such thing as an ordinary life.”
Garnette Mae Boles...

Send flowers to the Holt family.