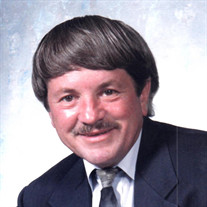 James (Jim) L. Bryan, Jr., 82, passed away on Sunday, March 14, 2021, after living a wonderful life. A 2:00 p.m. funeral service will be held on Saturday, March 20, 2021, at Woodbine Baptist Church with Rev. Thane Barnes officiating. Burial will follow at Stoneville City Cemetery. The family will receive friends from 1:00 p.m. until 2:00 p.m. prior to the service at the church. Masks and social distancing guidelines will apply. Jim was born on November 6, 1938 and was the son of the late Lacy and Gaynelle Bryan of Goldsboro, NC. After graduating from Goldsboro High School in 1957, he worked in highway construction, served in the US Army, and then began a lifelong career in radio. He started as an announcer, then moved into sales. He also managed two radio stations. One of his favorite positions was as “Jim’ on the “Tom & Jim Show” on WGBG in Greensboro during the 1970’s. He was dedicated to his family. He enjoyed fishing, playing his much-loved music, and spending time with his children and grandchildren. He loved the Lord and enjoyed attending his church. He will greatly be missed. In addition to his parents, he was preceded in death by his son, Alan Joyner; and his brother David Bryan. Jim is survived by his wife, who his world revolved around for 32 years, Janice Lester Bryan; his sister, Catherine Lohr; his brother, Lee Bryan (Diana); his sister-in-law, Janet Bryan; his daughters, Cynthia Lynn Nguyen (Lee) and Karen Bowling; his daughter-in-law, Tina Joyner; his grandchildren, Amanda Cumberton ( Jon), Dale James Nguyen, Mylynn Nguyen and fiancé Tony Torres, and Jessica Battle; a great-granddaughter, Lillionia; and several nieces and nephews. Ray Funeral Home is honored to serve the family of Jim Bryan and all are invited to share memories or offer condolences at www.rayfuneralhome.com.

The family of James Lacy Bryan, Jr. created this Life Tributes page to make it easy to share your memories.