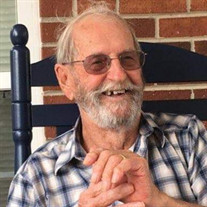 James Henry Dalton, 88, passed away on Tuesday, January 18, 2022 at Forsyth Medical Center. A Patrick County, VA native, James was born on September 2, 1933 to the late Abe and Sue Eliza Haley Dalton. He attended Bethesda United Methodist Church. James served in the US Navy and was a Korean War Veteran. He obtained his GED from Rockingham Community College in 1968 and retired from Sprint Telephone Company. After retirement he began working with his brother, Billy Dalton, building furniture. He started Boy Scout Troop 426 in Pine Hall in 1975 and served as the Scout Master for 30 years. During his tenure he was able to work with many young men with about 20 of them reaching the highest rank of Eagle Scout. Even after retiring from Troop 426 he still remained active on the District level and with troop 444 in Walnut Cove. Sonny was a member of the Pine Hall Ruritan Club where he enjoyed serving the community in a multitude of ways from annual stews to building ramps for senior adults. Sonny was an active member of his church where he drove the bus for the senior trips until he was 80. Sonny was a devoted husband and father. He was known for fishing, whistling, and his hugs. In addition to his parents, he was preceded in death by his sisters, Sallie Simmons, Margaret Simpson, Zelma Foley, and Elsi Spence; and his brothers, Tommy Dalton and Billy Dalton. Those left to cherish his memory are his loving wife of 64 years, Belva Garnett Lemons Dalton; his daughters, Myra Lynn Dalton of Walnut Cove, Charlene D. Crumley and husband Jonathan of Crestview, FL, and Michelle D. Harris and husband Ricky of Winston Salem; four grandchildren, Austin Crumley, Jacob Crumley, James Harris, and Emma Harris; and one great granddaughter on the way, Charlotte. Service will be held Sunday, January 23, 2022 at 2:00 at Bethesda United Methodist Church. Reverend Doctor Jerry Foley will be officiating the services. The family will have a private service at 2:00 with a service for extended family and friends to follow at 2:30 outside in front of the church. A guest registery along with memories will be set up in the fellowship hall and will be open while the family is in their private service. Church address is 1253 Bethesda Church Road, Madison, NC 27025. In lieu of flowers the family requests that donations be made in his memory to Pine Hall Ruritan Club. Donations can be sent to: Pine Hall Ruritan Club Care of Jayson Duncan, treasurer 3196 US 311N Hwy Pine Hall, NC 27042 Ray Funeral Home is honored to serve the family of James Dalton and all are invited to share memories or offer condolences at www.rayfuneralhome.com.

The family of James Henry Dalton created this Life Tributes page to make it easy to share your memories.

Send flowers to the Dalton family.