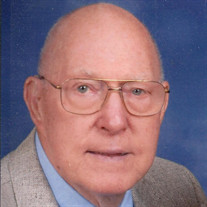 James Bruce Lawson, 87, passed away on Thursday, September 9, 2021 at his home. A 2:00 p.m. funeral service will be held on Sunday, September 12, 2021 at Ray Funeral Home with Pastor Danny Hemric officiating. Burial will follow at Mayodan Municipal Cemetery with Military Honors. The family will receive friends for one hour prior to the service at the funeral home. James was born in Rockingham County on December 24, 1933 to the late Jessie and Gracie East Lawson. James spent 4 years in the US Navy and retired in January of 1992 from the Naval Sea Combat Systems Engineering Station in Norfolk, Virginia after 30 years of service. He was a member of Mayodan United Methodist Church. James loved to travel with his late wife Lou, enjoyed singing, and being outdoors. He never met a stranger. He loved people, socializing, and most of all joking around. In addition to his parents, he was preceded in death by his wife of 60 years, Thelma “Lou” Amos Lawson; and his sisters, Virginia Stephens, Glenda Veach, and Faye Lawson. James is survived by his brother, Ray F. Lawson (Becky); his nieces, Julie, Amy, Diane, and Cindy Stephens Freeman; his nephews, Michael, Donnie, David, and Ryan Veach; and a dear brother-in-law, Donald “Donnie” Amos. In lieu of flowers, memorials may be made to Trellis Supportive Care, PO Box 863, Walnut Cove, NC 27052. The family would like to give a special thank you to Bruce’s caretakers Gena Hardy, Terry Fry, Lisa Ryan, savanna Parker, and his great niece Jana Grant who were dedicated, caring, and loved him with all their hearts. Ray Funeral Home is honored to serve the family of James Lawson and all are invited to share memories or offer condolences at www.rayfuneralhome.com.

James Bruce Lawson, 87, passed away on Thursday, September 9, 2021 at his home. A 2:00 p.m. funeral service will be held on Sunday, September 12, 2021 at Ray Funeral Home with Pastor Danny Hemric officiating. Burial will follow at Mayodan... View Obituary & Service Information

The family of James Bruce Lawson created this Life Tributes page to make it easy to share your memories.

Send flowers to the Lawson family.