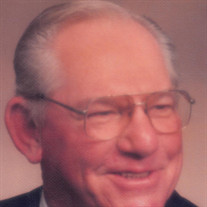 James Anderson Satterfield, 85, departed this Earth on Saturday, September 18, 2021 to go live in his heavenly home. A 2:00 p.m. memorial service will be held on Thursday, September 23, 2021 at Ray Funeral Home Chapel with Pastor Nathan Defalco and Pastor Tommy Brightwell officiating. The family will receive friends from 1:00 p.m. until 2:00 p.m. at Ray Funeral Home. James was born in Rockingham County on April 2, 1936 to the late George H. and Mary Sue Satterfield. He served five years in the United States Navy before going to work for Piedmont Gas Company. Later, he worked for MacField/UNIFI as an Overseer before retiring. When he wasn’t working second shift in the mill, he was tending the family farm growing corn, soy beans, wheat and tobacco. James was a member of New Life Baptist Church and was known by many through Rockingham County as a good man who would help you in any way he could. In addition to his parents, he is preceded in death by a sister, Louise Ferguson and a brother, Harry Truman Satterfield. James leaves behind a wife, Shirley Satterfield; two sons, Steve Satterfield (Carol) and Dave Satterfield (Joyce); a daughter, Shirl Satterfield-Broadnax (Thomas); three grandchildren, Kristina Hutchens (Travis), Alisha Broadnax and Timothy Broadnax; two great-grandchildren, Abigail and Aliyah Hutchens; nephew, James Rumley; two brothers, four sisters and 18 nieces and nephews as well as many friends and neighbors who will miss him dearly. The immediate family would like to thank both family and friends for the love and support shown to them throughout James’ journey through his last Earthly days as well as the many healthcare workers that cared for him. We could not have asked for better. Ray Funeral Home is honored to serve the family of James Anderson Satterfield and all are invited to share memories or offer condolences at www.rayfuneralhome.com.

The family of Mr. James Anderson Satterfield created this Life Tributes page to make it easy to share your memories.

Send flowers to the Satterfield family.