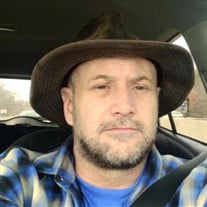 James “Willie” Edward Ziglar, III, 45, of Waynesville, passed away on Saturday, December 4, 2021. A 1:00 p.m. funeral service will be held on Friday, December 10, 2021 at Beaver Island Baptist Church with Ricky Vaughn officiating. Burial will follow in the church cemetery. The family will receive friends on Thursday, December 9, 2021 at Ray Funeral Home from 6:00pm until 8:00pm. Willie was born on July 1, 1976 to James Edward Ziglar, Jr. and Darlene Manuel Vaughn. He was a member of Beaver Island Baptist Church and served in the United States Air Force. Willie was a friendly guy who enjoyed telling jokes and making others laugh, and was extremely witty. He loved his children more than anything and was very proud of them. Willie loved the outdoors, golfing, photography, playing the guitar, and the Duke Blue Devils. Willie was preceded in death by his father, James Edward Ziglar, Jr.; his grandfather, James Edward Ziglar, Sr, and his grandmother, Marjorie Fayne. He is survived by his mother and step-father, Darlene and Kevin Vaughn of Stoneville; his loving wife, Valeska Franks Ziglar of the home; his children, Noah James Ziglar of Raleigh, Savannah Grace Ziglar of the home, and William Paul Ziglar of the home; his sister, Courtney Vaughn of Wentworth; his brothers, Alan Vaughn of Stoneville and Jamie Ziglar of Eden; his grandfather, Lynwood Fayne; his aunts, Tammy Manuel, Denise Yvette Hentz, and Frankie Wright; and his brother-in-law, Daniel Franks. Ray Funeral Home is honored to serve the family of Willie Ziglar and all are invited to share memories or offer condolences at www.rayfuneralhome.com.

The family of James "Willie" Edward Ziglar III created this Life Tributes page to make it easy to share your memories.

Send flowers to the Ziglar family.