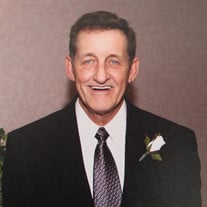 Kenneth Eugene Halford, also known as Skunk, died on March 30th, 2022. Skunk, 77, was known for his witty and sarcastic retorts to just about everyone who crossed his path. While he didn’t take crap from anyone, he was a kind and gentle man to his family and friends. His sense of humor was predictable yet ridiculous and even sometimes a bit insensitive. A non-church goer, ironically, Ken died at Baptist hospital in Winston-Salem, where he kept the nurses bursting with laughter during his last days. Ken was born on November 5, 1944, in Thomaston, Ga. and was preceded in death by his mother, Mary (Maze) Dubose. He grew up and attended school in Chester, SC and then served 9 years in the Army National Guard. After working years for Springs Mills in Chester, SC he became an auto mechanic for the City of Rock Hill, SC. Eventually he retired from Pine Hall Brick (Madison, NC) in 2008 after 16 years. During his early retirement years before his dementia progressed (and he likely forgot), he played golf almost daily. The only thing Ken loved more than golf was music. He played the drums and guitar and constantly reminded everyone that he was in several bands in the 1960s and 70s, …. and that he was an auto-mechanic that could fix anything if he had the right tools….. and was in the Army where he didn’t take crap from nobody. Ken was survived by his wife of nearly 45 years, Cindy (Kiser) Halford, from Madison, NC their daughters Kelli Halford and Kerrie (Halford) Key (husband DJ Key), grandchildren Riley (25) and Laina Key (12), along with 2 great grandsons. He had a huge family, whether by marriage, blood, adoption, or choice, he loved them all so much. Join us for an informal celebration of life potluck on Saturday, April 16th between 1-5 pm. There will be plenty of food so everyone drop by and visit for a bit to tell your favorite Skunk story or simply do what Skunk himself would do: just eat, and leave. The family will be creating a time capsule in his honor. If you wish to contribute, bring a memento (photo, note, trinket) of any kind. The celebration will be held at his daughter Kerrie’s home at 168 Angieline Drive, Stokesdale, NC.

Kenneth Eugene Halford, also known as Skunk, died on March 30th, 2022. Skunk, 77, was known for his witty and sarcastic retorts to just about everyone who crossed his path. While he didn&#8217;t take crap from anyone, he was a kind and gentle... View Obituary & Service Information

The family of Kenneth Eugene Halford created this Life Tributes page to make it easy to share your memories.

Send flowers to the Halford family.