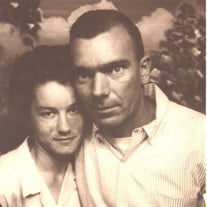 Laura McBride Wilkins, 84, went home to be with the lord on Monday, June 7, 2021 at Annie Penn Hospital. A 1:00 p.m. funeral service will be held on Thursday, June 10, 2021 at Ray Funeral Home with Rev. Timothy Gentry officiating. Burial will follow at Oak Grove Baptist Church Cemetery. The family will receive friends from 11:00 a.m. until 1:00 p.m. prior to the service at Ray Funeral Home. She was born on April 24, 1937, the youngest daughter of Mary Eliza Bullins McBride and William Hardin McBride. Laura loved and attended Morning Star Baptist Church, who she lovingly referred to as her “Church Family” for many years. Laura worked in textiles in her earlier years, though shortly after her marriage to her husband, Ronnie Fletcher Wilkins, she became a housewife, mother, and tobacco farmer. They raised tobacco to sell, planted large gardens, raised many farm animals, as well as their own honeybees. She was never afraid of hard work. She worked from sunup to sundown, cooking, cleaning, sewing, washing in the old type washing machine with the rinse tub and wringers to take out to the clothesline, hanging to dry no matter how hot or how cold it was. On top of all these backbreaking chores she still went to the tobacco fields with everyone else doing whatever was needed at the time for their crops. They all have fond memories of her, playing ball with the kids out in the big front yard, when the season wasn’t too busy for such a thing. She had just as much fun as any of the kids did! She was preceded in death by her husband, Ronnie F. Wilkins of 33 years at the time of his death in 1992; her children, Ronnie Monroe Wilkins, Ruby Wilkins Noah, Ronnie Allen Wilkins, Elaine Wilkins Wilmoth and Rita Ann Wilkins Mabe; her brothers, Johnny McBride and William McBride; her sisters, Alice McBride Gunter, Nannie McBride Stevens and Martha McBride Murphy; her four grandchildren, Jonathan Perdue, Tony Noah, Michael Wilmoth, Jason Wilmoth and Junior Noah. Laura is survived by: 5 children, Kent Quesenberry and wife Julie of Austinville, VA, Charles Wilkins and wife Linda of Madison, NC, Paul Wilkins and wife Alisha of Walnut Cove, NC, Barbara Wilkins Perdue and husband Charles of Kernersville, NC and Deborah Wilkins Hicks and husband Mike of Sandy Ridge, NC; 15 grandchildren, 26 great-grandchildren, and 4 great-great grandchildren. Ray Funeral Home is honored to serve the family of Laura Wilkins and all are invited to share memories or offer condolences at www.rayfuneralhome.com.

Laura McBride Wilkins, 84, went home to be with the lord on Monday, June 7, 2021 at Annie Penn Hospital. A 1:00 p.m. funeral service will be held on Thursday, June 10, 2021 at Ray Funeral Home with Rev. Timothy Gentry officiating. Burial will... View Obituary & Service Information

The family of Laura McBride Wilkins created this Life Tributes page to make it easy to share your memories.

Laura McBride Wilkins, 84, went home to be with the lord on Monday,...

Send flowers to the Wilkins family.