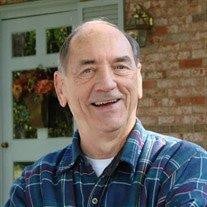 Milton Wayne Lee, age 82, of Alexandria, VA (though he still claimed Mayodan, NC), went home to the Lord on Wednesday, 23 October. Our loss is his gain; he is at peace. Known as “Wayne” to those in North Carolina, and “Milt” to those in Maryland and Virginia, he was the husband of his childhood sweetheart, DiAnne Barrow Lee, and celebrated 63 years of marriage last August. He reared 4 well-loved sons: Roger, Richard, Ryan, and Steven; and leaves 4 daughters-in-law he adopted as his own: Aimee, Joyce, Kelly, and Lindsay; and 7 grandchildren whom he loved deeply and delighted in spoiling: Nathaniel, Joshua, Julianna, Jonathan, Cameron, Sydney, and Jason. Milt was the son of Carey Fitzhugh Lee and Bernice Anne Joyce Lee. He was born 18 November 1936, in his maternal grandparents’ home in Mayodan, NC. As a child, his mother was diagnosed with tuberculosis and spent most of Milt’s childhood in a Black Mountain, NC sanitorium; he saw very little of her before her death when he as 9. He and his father lived with relatives of the Lee, Joyce, and Craig families over the years in Mayodan, Stoneville, Elon, and Greensboro. Blinded in his left eye in an accident at age 9, most never knew of his disability – he never complained; he just overcame. He drove a school bus, worked at a gas station in town, cleaned house for his Aunt Columbia, put together wagons, bicycles, and lawnmowers at Western Auto, worked for his Uncle Reid, slaughtered hogs, topped and primed tobacco, collected bottles, sold papers, and did most anything to earn a dollar. At age 16, he got his first kiss from a young, 14-year-old DiAnne Barrow. It didn’t take long for them to plan a life together, marrying 24 August 1956. Milt graduated as valedictorian of the class of 1955 of Stoneville High School in Stoneville, NC, but attended Mayodan School for one year with his bride-to-be. He made the decision to attend NC State University, with the assistance of his school principal who encouraged him and made an appointment for him to meet with faculty there, where he earned a scholarship in Electrical Engineering, graduating in 1961. While in college he earned money working odd jobs – even playing checkers for $1.00 an hour with a state champion checker champion who sought competition. He worked for Vick Chemical Company and for the City of Greensboro programming their early traffic signals and before accepting a position as a Patent Examiner with the U.S. Patent Office in Washington D.C. in 1962. Milt, DiAnne, and their first 2 children, Roger and Richard, moved to Seven Corners, VA, to begin his career, then to Bowie, MD in 1963 where Ryan and Steven were born. While working full time, Milt attended law school at night at the University of Baltimore School of Law, earning his J.D. in 1966. He switched from the U.S. Patent Office to support the Department of Defense with positions at the Naval Ordinance Lab and the U.S. Army Materiel Command. When he accepted a position with the Night Vision Laboratory at Fort Belvoir, VA, the family left Bowie, MD, and moved to Alexandria, VA, in December 1970, welcomed by rain, snow, and mud into their new home. Milt would serve as the Department of Army Director of Intellectual Property and Director of the Night Vision Laboratory until his retirement in 2003. He then devoted himself -- unfettered by work -- to his wife, sons, and grandchildren. He was a life-long tinkerer. He refused to pay someone to do a job he could do himself. No one else but Milt ever worked on his cars, did his plumbing, electrical, any work on his home (although he did let someone else dig his in-ground pool), maintained his yard, handled his investments, or did his taxes. He was a Renaissance Man and could do it all. He did his best to involve his sons, teach them, and give them every opportunity. Somehow, he was able to work full-time, work part-time jobs, go to law school at night, and still attend every baseball or basketball game and track meet of his boys, every school play they performed, and even coached their teams. He always made time for his family and put them first. He was there for his family, but was always available to his neighbors, his co-workers, his church friends, and the friends and families of his sons. He was loving, caring, and giving throughout his life. His hardscrabble upbringing enabled him to appreciate what he had. Milt was quiet for the most part, but people listened when he spoke. He was a man of few words and lived by his actions. Milt survived his son, Ryan, whom we lost in 2017, and never quite recovered from that loss. Milt was a man among men. He was hard and soft. He loved and was loved. He’ll be missed and remembered – for his actions toward each of us . . . for what he meant to each of us . . . for what he inspired in each of us . . . and for who he was to each of us. We shared him for 82 years. We’ll never forget him. We are who we are because of Milt – our husband, father, father-in-law, grandfather (Papa), nephew, cousin, friend, neighbor, mentor, and colleague. Milt, may you rest in the peace of the Lord. The family will receive visitors Sunday, 3 November, 12:00-4:00 p.m., at Jefferson Funeral Chapel, 5755 Castlewellan Drive. Alexandria, VA 22315. (703) 971-7400). Interment will be in the family plot in the Old Mayodan Cemetery in Mayodan, NC, Saturday, 30 November, at 11:00 a.m. In lieu of flowers, the family requests donations be made in Milt’s memory to the American Lung Association, online www.lung.org or by mail (9702 Gayton Road, #110, Richmond, VA 23238).

The family of Milton Wayne Lee created this Life Tributes page to make it easy to share your memories.

Send flowers to the Lee family.