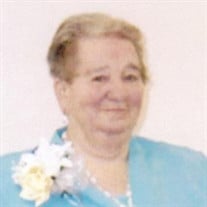 Minnie Lorene Chaney Brim, 80, of Madison, passed away on Sunday, April 10, 2022, at Wake Forest Baptist Hospital. A 2:00 p.m. funeral service will be held on Thursday, April 14, 2022, at Ray Funeral Home with Pastors Roy and Kenny Bullins officiating. Burial will follow in the Brim Family Cemetery. The family will receive friends on Wednesday evening, April 13 from 6:00 p.m. until 8:00 p.m. at the funeral home. Minnie was born in Stokes County on November 29, 1941, to the late William and Lillie Holt Chaney. She was a member of Crossroads of Life Ministry. Minnie was a loving mother, grandmother, and sister who always helped others if she was able. In addition to her parents, she was preceded in death by her first husband, Ernest Chaney; her second husband, Jesse Jeff Brim; and her brother, Bobby Chaney. Those left to cherish her memory are her children, Ronnie Brim and wife Lynda of Madison and Connie Bullins and husband Kenneth of Madison; her sisters, Peggy Brim of Madison, Dorothy Chaney of Madison, and Mary Ruth Bullins and husband Ray of Madison; her brothers, Benny Chaney and wife Debbie of Madison and William Joe Chaney of Sandy Ridge; three grandchildren, Sarah Ann Bullins, Mia Brim, and Liam Brim; and two step grandchildren, Jacob and Patrick Lewis. Ray Funeral Home is honored to serve the family of Minnie Brim and all are invited to share memories or offer condolences at www.rayfuneralhome.com.

The family of Minnie Lorene Chaney Brim created this Life Tributes page to make it easy to share your memories.

Minnie Lorene Chaney Brim, 80, of Madison, passed away on Sunday,...

Send flowers to the Brim family.