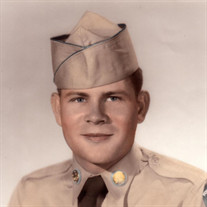 Olyian Harrell Bullins, Sr., 88, passed away on Monday, August 16, 2021 at Wotlz Hospice Home in Dobson, NC. A private family graveside service will be held on Thursday, August 19, 2021 at Sandy Ridge United Methodist Church Cemetery with Rev. Ed Hartman officiating. A Stokes County native, Olyian was born on September 27, 1932 to the late Pete and Rosie Mabe Bullins. He was a veteran in the US Army and retired from UNIFI after 22 years. He was a loving father and husband who enjoyed spending time with his family, especially his great grandchildren. He enjoyed the outdoors often sitting on the porch with his wife watching traffic and the hummingbirds. He also enjoyed riding his lawnmower even if he wasn’t mowing. Olyian also enjoyed racing and baseball. In addition to his parents, he was preceded in death by brothers, Kenneth, Leonard, Owen, Willie, and Bobby Bullins. He is survived by his wife, Betty Robertson Bullins of the home; his children, Olyian Bullins, Jr (Arlene) of Stuart, VA, Susan B. Tucker (Kennan) of Danbury, Jerry Bullins of Lawsonville, and Miranda Nelson of Lawsonville; his brothers, Pete Bullins, Jr. (Jeanette) of Mayodan, Cecil Bullins (Barbara) of Mayodan, and Avery Bullins (Doris) of Madison; his sister, Jane Hicks of Pine Hall, his grandchildren, Susan Natasha Handy and Kayla Tucker Collins; and his great grandchildren, Kalei Danielle Handy, Bella Handy, Jordan Handy, Tucker Collins, and Allie Collins. In lieu of flowers, memorials may be made to the Woltz Hospice Home, 945 Zephyr Road, Dobson, NC 27017. Ray Funeral Home is honored to serve the family of Olyian Bullins, Sr. and all are invited to share memories or offer condolences at www.rayfuneralhome.com.

The family of Olyian Harrell Bullins Sr. created this Life Tributes page to make it easy to share your memories.