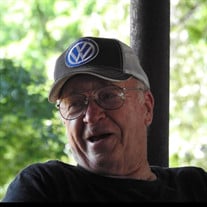 Raymond Lester Edwards passed away Tuesday, May 17th, 2022, due to injuries from a head on collision with an impaired driver. A visitation will be held on Friday evening, May 20, 2022, from 6:00 p.m. until 8:00 p.m. at Ray Funeral Home. He was born on January 29, 1936, to Ernest and Irene Smith Edwards. At 86, he was a go getter, an inventor, a mentor, and a friend to many. Raymond joined the Army out of High School and headed to Germany in March of 1954. While on leave, he would tour as many countries as he could. His thirst for travel was never quenched. After returning home, he married Nancy Williams and fathered three children. In 1963, he went to work for Dupont. He took an early retirement in the late 80’s. At this time, he converted a 1960 4104 Greyhound bus into a motor home and his travels started. He visited 48 states, Canada, and Mexico. He has made friends from here to California and Florida to Canada. He travelled in the bus until the Pandemic. During the stay at home, he sold the bus and was working on a LeSharo motor home so he could get back on the road. He was preceded in death by his parents, the mother of his children and love of his life, Ann Carter; and a daughter Debbie E. Williams. He has left behind his daughter, April Brame (Larry); his son, Raymond Jr. (Sharon); grandchildren, Pamela Kilby (Doug Mabe), Johnny (Ashley), Michael (Jessica), and Joshua (Teresa) Edwards; great grandchildren, Megan Kilby, Amber and Riley, Jacob, Joseph, and Olivia, Joshua Jr., Helena and Colton. A memorial service to honor his life will be held at his place in the coming weeks. We will post the time and date as soon as we decide via Facebook, Messenger, or Text. Ray Funeral Home is honored to serve the family of Raymond Edwards and all are invited to share memories or offer condolences at www.rayfuneralhome.com.

Raymond Lester Edwards passed away Tuesday, May 17th, 2022, due to injuries from a head on collision with an impaired driver. A visitation will be held on Friday evening, May 20, 2022, from 6:00 p.m. until 8:00 p.m. at Ray Funeral Home. He... View Obituary & Service Information

The family of Raymond Lester Edwards created this Life Tributes page to make it easy to share your memories.

Send flowers to the Edwards family.