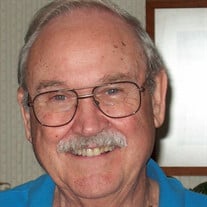 Robert Theodore Joyce (Bob), 89, died Monday, October 14, 2019 at Annie Penn Hospital in Reidsville, North Carolina. An 11:00 a.m. funeral service will be held on Friday, October 18, 2019, at the Episcopal Church of the Messiah at 114 S. 2nd Avenue, Mayodan, NC with Reverend Rocky Rachal officiating followed by a burial ceremony at Mayodan Municipal Cemetery, S. Ayersville Road, Mayodan, NC with military honors by the Air Force. The visitation will be from 6:00 p.m. to 8:00 p.m. on Thursday, October 17, 2019 at Ray Funeral Home at 119 North Market St, Madison, NC. A Rockingham County native, Bob was born on December 23, 1929 to Robert Thomas Joyce and Roxie Mills Joyce of Mayodan, NC. He was the second youngest of seven children; Wilbur, Edna, Ruth, Dorothy, Mildred and Roger (all deceased). Bob graduated from Mayodan High School in 1946. After graduating high school, he worked at Washington Mills. He later joined the Air Force and was stationed in the Pacific. Upon his return from service, he attended college at the University of North Carolina at Chapel Hill where he received an undergraduate degree in Business Administration in 1956. He married Edna Mae Ecelbarger of Big Run, PA in 1955 and together, they had three children, Robert Theodore Jr. (Todd), David Paul and Jennifer Anne. Edna Mae passed in 1992. In 1995, Bob married Esther Patricia Martin (Patsy). In 2000, they moved from Atlanta to Mayodan. Todd lives in Las Vegas, NV, with his wife Ann and they have two children, Kevin and Michelle. David lives in Dunwoody, GA, with his wife Liz and they have four children; Maggie, Liza, Paul and James. Jennifer Maceyko lives in Dunwoody, GA with her husband Steve with their three children; Andrew, Amanda and Alan. Bob’s career began at AT&T where he worked until 1971. He left AT&T to take a senior human resource role at Georgia Power and later became the head of human resources for a large Atlanta based bank. He later ran his own Atlanta based executive recruiting firm until his retirement in 1995. Bob was an active member of several Episcopal churches including St. Patrick’s (Atlanta), St. Martin in the Fields (Atlanta) and Episcopal Church of the Messiah (Mayodan). Bob’s hobbies included following UNC basketball, genealogy and watching his children and grandchildren’s youth sports. He enjoyed charitable work like Meals on Wheels and was also a member of the American Legion. Ray Funeral Home is honored to serve the family of Robert Joyce and all are invited to share memories or offer condolences at www.rayfuneralhome.com.

The family of Robert "Bob" Theodore Joyce created this Life Tributes page to make it easy to share your memories.

Send flowers to the Joyce family.