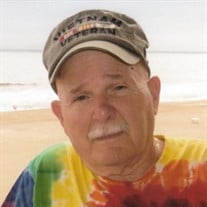 Robert “Bob” Franklin Wyatt, IV, 70, went home to be with our Lord and Savior on Monday, April 20, 2020 at Catawba Valley Medical Center. A 6:00 p.m. drive-in graveside inurnment will be held on Friday, April 24, 2020 at Mayodan Municipal Cemetery with Rev. Randy Jessup officiating. Due to Covid-19, friends are invited but asked to remain in their vehicles during the service. Bob was born on November 8, 1949, to the late Robert Franklin and Wanda Wyatt, III. He loved the Lord and was a member at First Baptist Church of Mayodan. He also taught Children’s Church and Sunday School for Camden Christian Church. He was a truckdriver with Cargo Transport. Bob honorably served his country having three tours in Vietnam in the United States Navy, as well as serving in the Army National Guard. Bob was a member of the DAV, American Legion, and FOP. He also was a Norfolk City Policeman for over 12 years. He was an avid sailor and captain, training people to sail on up to 45-foot sailboats. Bob was a beloved husband and father. A generous and outgoing man who was always willing to help. Bob is survived by his loving wife of 30 years, Jennifer Stultz Wyatt of the home; two children, Kayla and Joseph Wyatt of the home; his sisters, Shawn Eudy (Gary) of Denver, NC and Cheryl Brown (Don) of Charlotte, NC; and his father-in-law, who he considered was just like a father, Cletus Stultz of Roanoke, VA. In lieu of flowers, memorials may be made to Mayodan First Baptist Family Life Center, 101 S. 1st Ave, Mayodan, NC 27027. Ray Funeral Home is honored to serve the family of Robert Wyatt and all are invited to share memories or offer condolences at www.rayfuneralhome.com.

The family of Robert Franklin Wyatt IV created this Life Tributes page to make it easy to share your memories.

Send flowers to the Wyatt family.