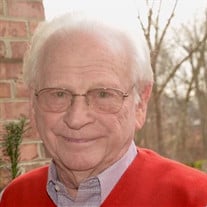 Vernon Lee Penry, Sr. passed away on November 8, 2019. He is survived by his wife of 69 years, Jean Bailey Penry; three children: Vernon Lee Penry, Jr. (Lori) of Liberty; Melinda Penry, Jeanie Duncan of Greensboro; five grandchildren: Ruffin and Neil Bowman; Landis and Larson Penry; and Lucas Duncan; and two great grandchildren. Vernon was a life-long entrepreneur. He owned and operated Penry’s Jewelry Company with his wife, Jean, in downtown Greensboro for many years. He was a master craftsman and designer and later conducted his professional trade out of his home for many years. An avid outdoorsman, Vernon acquired 20 acres in Guilford County where he built a house everyone told him was impossible to build. Yet filled with unmatchable determination and perseverance, he never gave up on anything. This led him to serve as contractor and build the home for his treasured family, a place where much love was lived, many family gatherings were held, and new traditions became celebrations. Huge gardens were planted, cared for, and harvested. A barn soon followed, a place to house quarter horses, and fields and hills made room for the herd of beef cattle. Always the next project on the horizon for this ambitious visionary, he built his own lake, stocked it, and many a fish became a meal. Vernon, a man of the greatest faith, walked his talk, lived his faith deeply, and proclaimed the Gospel, giving generously in countless ways to projects and people in need. The mission work he began and participated in always started with a challenge to every church and all people to give and do more. His big heart was never satisfied with the minimum. He always gave his all in everything he touched. His strong, unwavering faith was his guide throughout his life. Anyone who spent time with him always left with more than when they arrived. The legacy he leaves is to make this world a better place – because nothing is impossible with God – and to that Vernon had only one resounding response. He proclaimed, “Amen!” The family will hold a private memorial service. Donations may be made to Hospice & Palliative Care of Greensboro, 2500 Summit Ave., Greensboro, NC, 27405. Online condolences may be offered at www.forbisanddick.com or to www.rayfuneralhome.com.

The family of Vernon Lee Penry created this Life Tributes page to make it easy to share your memories.

Send flowers to the Penry family.